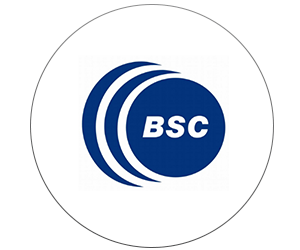 Barcelona Supercomputing Center-Centro Nacional de Supercomputación (BSC-CNS) is the national supercomputing centre in Spain. We specialise in high performance computing (HPC) and manage MareNostrum, one of the most powerful supercomputers in Europe, located in the Torre Girona chapel.

BSC is at the service of the international scientific community and of industry that requires HPC resources. Our multidisciplinary research team and our computational facilities –including MareNostrum– make BSC an international centre of excellence in e-Science.

With a total staff of more than 650 R&D experts and professionals, BSC has been successful in attracting talent, and our research focuses on four fields: Computer Sciences, Life Sciences, Earth Sciences and Computer Applications in Science and Engineering.

Most of BSC’s research lines are developed within the framework of European Union research funding programmes, and the centre also does basic and applied research in collaboration with leading companies such as IBM, Microsoft, Intel, Nvidia, Repsol and Iberdrola. The quality of our investigation has been recognized by the Spanish government with the Severo Ochoa Excellence Centre grant for cutting edge Spanish science.

The Life Sciences Department composed by 6 research groups and 5 technical units works on various aspects of computational biology, ranging from bioinformatics for genomics to computational biochemistry and Natural Language Processing. The department participates in large international genome networks (ICGC, IRDiRC, GA4GH) as well as in research collaborations with major IT companies. It works in developoing applications in several areas of biomedicine and supports computational solutions for the analysis of large scale omic and biomedical data in HPC environments.

This website uses cookies to improve your experience while you navigate through the website. Out of these cookies, the cookies that are categorized as necessary are stored on your browser as they are essential for the working of basic functionalities of the website. We also use third-party cookies that help us analyze and understand how you use this website. These cookies will be stored in your browser only with your consent. You also have the option to opt-out of these cookies. But opting out of some of these cookies may have an effect on your browsing experience.
Necessary Always Enabled
Necessary cookies are absolutely essential for the website to function properly. This category only includes cookies that ensures basic functionalities and security features of the website. These cookies do not store any personal information.
Non-necessary
Any cookies that may not be particularly necessary for the website to function and is used specifically to collect user personal data via analytics, ads, other embedded contents are termed as non-necessary cookies. It is mandatory to procure user consent prior to running these cookies on your website.
SAVE & ACCEPT